Running for Nige and raising $2k along the way

Ipswich local, Linda is joining us at Park2Park for a very special reason this year.

“I want to thank the people that worked on my husband that night at the Ipswich Hospital,” Linda said.

Linda’s Husband, Nigel was a fit and avid runner, but in 2019, he tragically passed away from a heart attack.

Since registering for Park2Park, Linda has raised over $2,000 on her fundraising page for Park2Park in honor of Nigel and encourages others to raise funds too.

Regardless of how Nige (as she called him) felt, he didn’t miss his two hours of training most days in preparation for the Gold Coast Marathon in 2019.

Sadly, he missed it by a week. 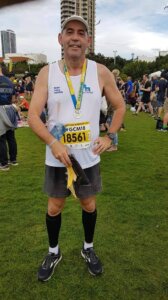 “I may have lost a husband, but I have gained a running family”

“I’m running Park2Park to thank the people that worked on Nige that night at the Ipswich Hospital. 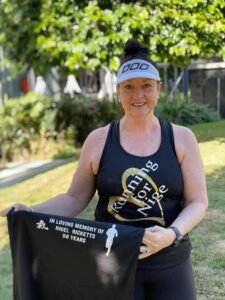 On the day Nigel passed, everything felt normal. The pair sat down to have some lunch with friends just after 1pm.

“That day, he had done his two hours of training, he was having a couple of drinks, he was happy, having a chat with our neighbors.

“Then all of a sudden, he slumped over. He was breathing funny. He threw his hands in the air like he couldn’t breathe and was in severe pain, but couldn’t speak.

“All I kept saying to Nigel was, ‘just fight for us’ – this was so surreal: couldn’t believe what was happening.

“It was the worst night of my life”

“I remember this massive room, it was clean, immaculate, quiet.

“There was a curtain drawn with a ribbon with three butterflies hanging. It was a sign of respect that someone has passed.

“I remember cuddling him and I said (to the nurses) that he would hate it, he was so cold.

“The nurse went and got a heated, weighted blanket and put it on him, tucked him in, and said, ‘there you go handsome’.

“The Hospital Staff were so respectful”

“I’ve never stopped thinking about the hospital and the ways I can give back.

“I wanted to say thank you. To say, I’ve never forgotten what they have done. 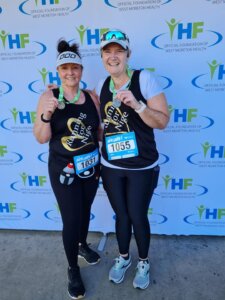 Giving back made easy

“I don’t like asking people to donate, but I’ll do it every year now.

“Even if it’s something small, even if it’s just me donating $200 each year. It all adds up.

Linda is encouraging everyone to create a fundraising page too. It’s simple, easy, and only takes a few clicks to get started.